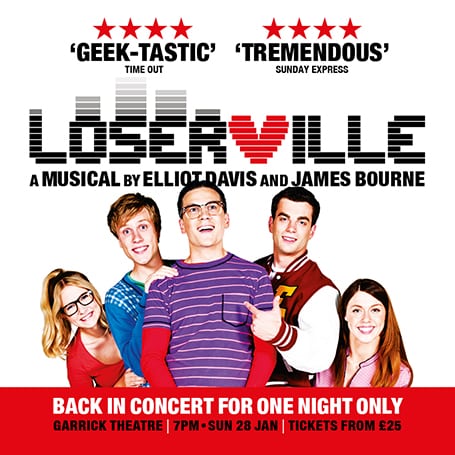 Michael Dork returns. The Olivier Award nominated musical Loserville is back in concert for one night only.

It’s 1971. Michael Dork may be a computer geek but he’s invented something that could change the world. He’s also discovered girls: a prospect (almost) as exciting as his love of binary. Holly is the girl: she has looks and brains and wants to be the first woman in space – well, this is 1971! But will she want Michael?
Now meet the class of 1971. Embrace your inner geek.
Don’t predict the future…invent it.

Loserville returns to the Garrick Theatre for one night only, in memory of Chris Hardman (aka ‘Lil Chris) who played Francis in the original West End production. The proceeds of this one-off charitable concert will go to the Maytree Trust which supports people in the midst of suicidal crises, and Youth Music Theatre UK’s Bursary Fund for young performers from less well-off backgrounds to enable them to develop careers in the arts.

***A limited number of exclusive VIP Super Seats are on sale NOW! These premium tickets include a variety of unique perks, including:
• Meet and greet with Maytree Patron Alastair Campbell
• Meet and greet with YMT Patron James Bourne, Loserville’s Co-Creator and Singer/Songwriter (of Busted fame), and YMT Patron Peter Duncan (of Blue Peter fame)
• An invitation to the after-party with the Cast, Creatives and very special guests
• The best view in the house for this one night only concert!***

*** Want to be in the show? There are 6 ensemble places available at auction. Join the company, sing on stage in the West End and support two fantastic charities. Bid for your place HERE now. ***