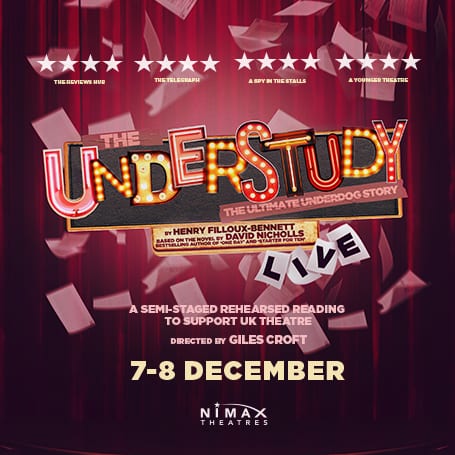 Actor Stephen McQueen has just landed a dream West End role. Well, that’s not quite true – what he’s going to be is understudying film star (and 12th Sexiest Man in the World) Josh Harper in the brand new show Mad, Bad and Dangerous to Know, but still…

Whilst he’s waiting for his time to shine, he reflects on his career – one that has spanned everything from (non-speaking) Rent Boy 3 in The Bill to his recent starring role as Sammy in the (low-budget) regional tour of Sammy The Squirrel’s Seriously Silly Safari.

With this new job Stephen’s stage career may be destined for the dizzying heights, but not everything is going quite as well. Stephen’s wife left him two years ago, wondering if he’d ever grow up; his daughter wonders when he’ll get an actual job; worst of all, he’s starting to fall for the leading man’s wife.

The Understudy is the story of an underdog – a failed husband, a failing father, a failing actor, and the impossible choice he’s going to have to make between stealing the show and stealing another man’s wife.

The Palace Theatre operates strictly under the government COVID-19 guidelines. For further information check our COVID-19 secure information page. All bookings in a party must only be from the same household or the legally defined support bubble.